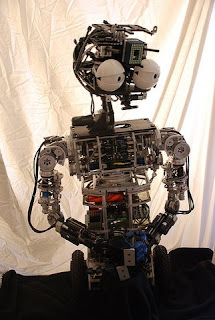 Robot engineers at the Personal Robots Group at MIT, Xitome Design and UMASS Amhurst have been working hard to develop something very important and new for domestic robotics. They have found a way to mix a relatively mobile, skillful physical movements and unique social human interaction in a single robotic platform named MDS (Mobile Dexterous Social Robotics). Their efforts will concentrate in having robots socially interact with humans in order to have artificial intelligence surface from it. These robots will be about the size of a 3 year old, move around similar to a Segway and able to carry a 10 Lb. object with natural human gestures. The MDS face will be very articulated in order to achieve a high level of expressions. The head will carry multiple sensors (movable camera for each eye, 3D depth mapping IR cameras, high gain microphones for audio localization and speaker for speech synthesis). The ramifications from this project alone will have major impact on future domestic robotic products. The MDS robot is exactly what I have been waiting for to have in the home or office. This type of robot will close the gap between humanoid (Asia general design) and task oriented (America/Europe general design) robotics.
Inspired by Nikolai Tesla at 5:10 PM