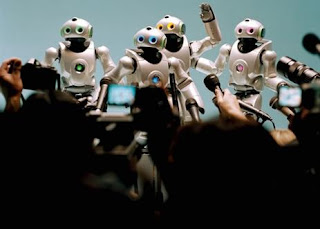 Back in 2002 Sony seemed to be in the forefront of robotic technologies. With Aibo already in the market for 3 years (1999) and having a cult following of owners it seemed right to continue creating domestic robots. So in that same year Sony officially announced the development of the "SDR-4X" which later became known as QRIO (Quest for cuRIOsity). Advanced for it's time this small entertainment robot had the following:

But in 2006 Sony put an end to their domestic robotics line (Aibo and Qrio) and development. Sony was well ahead of the game and the market was not there until iRobot and Wow Wee paved the way for mass production and acceptance of home robotics. Sony should get back on the saddle and pursue their Robotics development and products. Imagine just what great products they may introduce to us if they wanted, they could be the Apple Computer of home robotics!
Inspired by Nikolai Tesla at 5:48 PM