Anybot's Monty: The New Kid In The Block 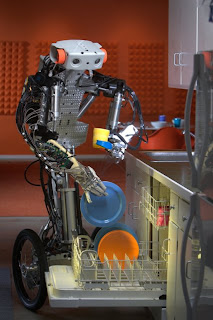 It is interesting to see new domestic robots come out each year. Anybot, from Mountain View - California, has been in the business of creating robots since 2001. Anybot is the brainchild of Trevor Blackwell, Ph.D whom is the founder and CEO. Mr. Blackwell created the first point-and-click Internet storefront system which still runs "Yahoo!Store".

Currently they only have two main robots: Monty (pictured above) and Dexter. Monty is human operated, moves with a segway-like mechanism and is fully articulated as you can see in the video. As you can see in the picture, Monty seems to be destined to be used around the home but what will make it successful is by Anybot engineers giving it a brain in order to be fully autonomous. I could see how Monty and Dexter can help out in dangerous situations where human control may be needed but in the home what rules is autonomous robots. That is why the video above is funny, Monty opening and using another non-autonomous robot like iRobot's 500 series Roomba. We expect to see Anybot make great progress with both of their robots.
Inspired by Nikolai Tesla at 1:13 PM