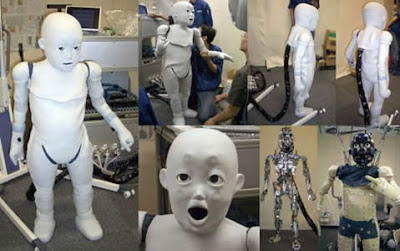 Many of you will have a repulsive emotional response towards this type of robot. This is typical and expected human behavior. The students from Georgia Tech. were into something when they were researching as to why many Roomba owners gave their robot names and treated them as they were a living object compared to their dishwasher or toaster. This has to do much with the "Uncanny Valley" hypothesis. The Uncanny Valley is a hypothesis about robotics concerning the emotional response of humans to robots and other non-human entities. It was introduced by Japanese roboticist Masahiro Mori in 1970. Mori's hypothesis states that as a robot is made more human like in its appearance and motion, the emotional response from a human being to the robot will become increasingly positive and empathic, until a point is reached beyond which the response quickly becomes that of strong repulsion. However, as the appearance and motion continue to become less distinguishable from a human being's, the emotional response becomes positive once more and approaches human-to-human empathy levels.

This area of repulsive response aroused by a robot with appearance and motion between a "barely-human" and "fully human" entity is called the Uncanny Valley. The name captures the idea that a robot which is "almost human" will seem overly "strange" to a human being and thus will fail to evoke the empathetic response required for productive human-robot interaction. Welcome to the new dawn of robotic and A.I. technologies that will exist in our homes.
Inspired by Nikolai Tesla at 7:42 PM