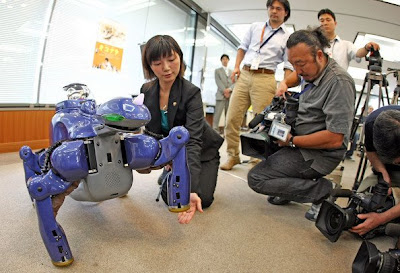 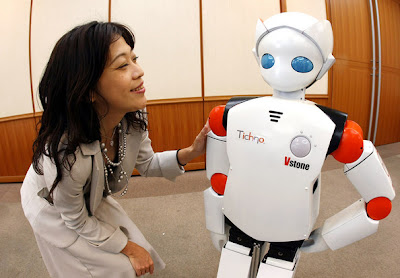 This past week, four Japanese domestic robot companies held a press conference in Tokyo to announce their newly created federation. The reason you may ask? If you have been reading my posts you would already know! Japan domestic robotics industry is feeling South Korea's threat of becoming the world authority in domestic robotics within a decade. The South Korean government is embracing domestic robotics with wide open arms by aiming to put a robot in every home by 2020, creating two robot theme parks by 2013 and drafted the world first robotics ethics code in 2007. Why the rush? Both Japan and South Korea are faced with a population problem; populations are aging fast and birth rates are low so both need to create robots to care for the elderly. Japan has always been in the forefront within robotic technologies and it would be a dishonor for them to loose the title to someone else. It would be interesting to see what all of this leads to but one thing is for certain, all of us will enjoy the results! Where is Sony when Japan needs them the most?!
Inspired by Nikolai Tesla at 12:01 AM