WALL-E and His Domestic Robot Friends 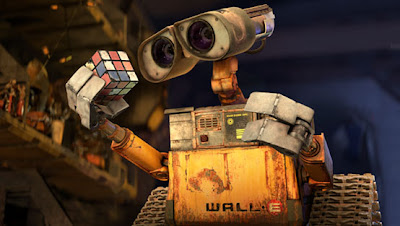 I watched Pixar's "WALL-E" last night at a special previewing. The movie is a great! Greater if you have kids (of all ages, including you) and/or anyone who loves robotics. WALL-E is a robotic cleaner that was left by the humans on Earth to clean up after them (similar to what our domestic robots do at home). Earth was abandoned by humans, for almost a millennium, because they have polluted it and used up all its resources. Not to give out the rest of the story, the movie does illustrate to how domestic robotics could play out in our daily lives to an extreme!
Colin Angle, CEO/Co-found of iRobot, should be jumping up and down with joy since the movie illustrates his view of future domestic robots being designed for specific tasks like his Roomba and Scooba. I think otherwise, the trend will be inclined to have domestic robots do more than one task AND will move towards fully humanoid (Honda's ASIMO, PAL's REEM B) and/or semi-humanoid (Anybot's Monty, Vecna Robotics HomeBEAR). Watch the movie and let me know your thoughts about future domestic robots, will they be task specific or multi-purpose?
Inspired by Nikolai Tesla at 8:16 AM