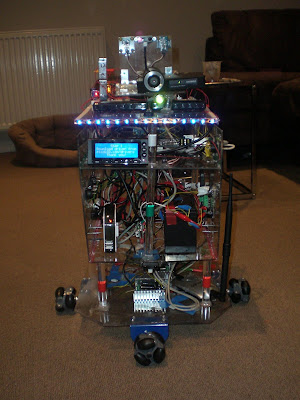 Here is a nice one, a Linux embedded hardware enthusiast/PHP & MySQL developer named Adam Palmer has created a nice domestic robot from scratch! He is not the only one doing something like this but his designs and implementation use "off the shelf" parts that can inspire anyone to re-create this robot on his or her own! It is not a WowWee Rovio, an iRobot ConnectR or an Erector Spykee but it can do as such and then some more if one wished. Adam created this robot from idea to final product within a period of about two months. He used an Alix Mainboard
("brains" of the robot), 11.1v 2000-5000mAh LiION battery, gear motors, omnidirectional wheels , ultrasonic sensors, LEDs, light sensors, speaker/mic, IR transmitters, pico LCD, handful of relays and metal/plexiglass chasis to set this guy or gal up. Adam likes to think of this project as an "intelligent PC" but technologies like these tend to merge within robotics easily. Check out a video of his "domestic Robot" at his website (http://www.adamsinfo.com/). I applaud Adam for creating such a device and sharing it with all of us; I hope it inspires many of you out there to do the same by making your ideas into reality.
Inspired by Nikolai Tesla at 5:00 AM