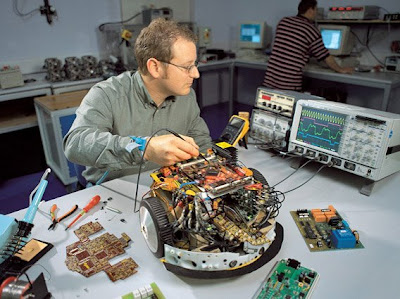 It has been a couple of years ago that Dyson reported that they were working on a robotic vac (DC06). Soon after the great news they informed the world with the following:

"Given current technologies, it is impossible to achieve high pick-up performance without pushing the cost of the machine above acceptable levels. Therefore Dyson will not be releasing this model at the present time."

That was back in mid 2005 but since then technology seems to have caught up with Dyson's engineers and they have recently posted the following at their site:

"Dyson engineers are researching robotics, but it takes time. We could have launched DC06 and heralded it as the first robotic vacuum cleaner. It has three onboard computers, 2,000 electronic components, 27 separate circuit boards and 70 sensory devices. As robots go, it's highly advanced. More so in fact than robot vacuums available today. But we want one that cleans properly and guides itself more logically than a human would. A truly autonomous machine, rather than a glorified carpet sweeper. Propulsion and battery life will be key. And we're getting closer." 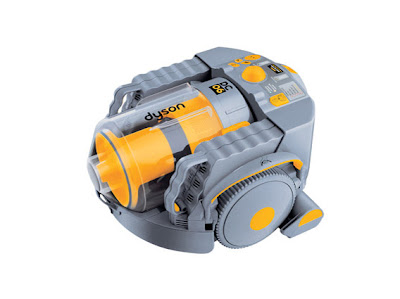 Dyson seems to be very aggressive with creating an intelligent robotic floor cleaner that will make the iRobot Roomba and any other current floor cleaner robot seem like a toy. With 70 sensors and 3 on board computers can bring a "smarter" robot but at what price? That is the question. How much are you willing to pay for a "truly autonomous" domestic floor cleaning robot? Personally I was willing to pay US$1200 on a Karcher RC3000 for being very close to an autonomous robot. Let us wait and see what Dyson comes up with since surely it will be something revolutionary within the domestic robotics market.
Inspired by Nikolai Tesla at 12:05 AM

It's a perfect vacuum cleaner vacuum, I love this machine