Cylons Currently Live Among Us 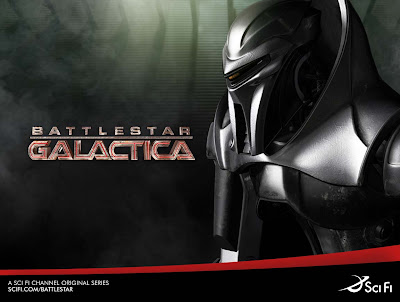 If you have not noticed, I am a huge Battlestar Galactica (BSG) fan. The new BSG series ended this past Friday (March 20, 2009) with a big bang. I had my doubts that it would end on a good note since I almost lost my interest during season 4 but Ronald D. Moore magically pulled it off with outstanding results (specifically for us domestic robot enthusiasts). So how are Cylons currently living among us? Take a look around your home, you will find them as a Roomba, Karcher RC3000, Sony Aibo, i-Sobot, Lawnbot, MindstormsNXT, etc. Humanoid domestic robots will come soon after, as seen with i-Cub, QRio, Aldebaran, Reem B and Asimo. With time they become more like humans and be "more human than human" as shown in Sci-Fi stories like Battlestar Galactica, Blade Runner and The Terminator. Will they one day revolt against their creators like shown on these Sci-Fi films? Maybe, it depends on how we create them; giving robots the capability to kill human beings is a sure way to have them one day revolt against us but there is always hope to do right thing. Artificial Intelligence and robotics will collide shortly in produce machines that will be capable to have independent thought but let us design them to continue cleaning our floors, help us explore planets and be our partners to enlightenment otherwise "all of this has happened before, and it will all happen again."
Inspired by Nikolai Tesla at 9:00 AM

Yup, BSG in my opinion is the best Sci-Fi TV series ever product by Man.

Although I was starting to loose interest after "Razor" and I caught the last episodes from Hulu.com.

Have you read Raymond Kurzweil's books or heard him speak - he predicts that man-machine interfacing will occur by 2035(!)

Maybe we should give them 4 year life spans :)

Kruzweil is a big believer of "singularity" but I am yet to see some of his predictions to come about like he said. I still like to hear his thoughts but a 4 year life span will cut it closer to Blade Runner-like fail safe methods...we already have something like that and its called the iRobot Roomba (just subtract 3 years from it).