A True Mecha "David" Is Only A Few Years Away 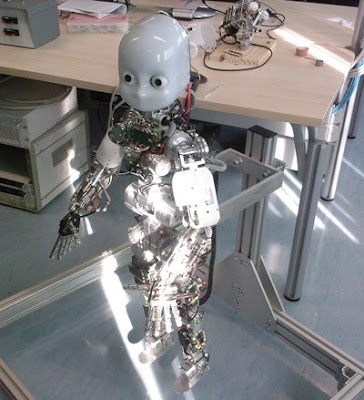 It is funny how sometimes life imitates Science Fiction and vice versa. A couple of posts ago a picture of two kids with their humanoid robot friend and Kubrick/Spielberg created the movie "A.i. - Artificial Intelligence" about a boy robot (Mecha) called "David". It is early 2009 and we are only a few years away from the introduction of the first human child like robot called "iCub". iCub is a research project, funded by the European Commission, to study cognition through a child-like humanoid robot. This project is open to all; the platform is openly distributed, the software is open source and they are open to new research partners (do you hear that iRobot?) and worldwide collaboration. Talk about a great ambition!

iCub is currently able to move like a human being and recognize objects. What will make this robot unique from all others is the open platform and collaboration that exists from the beginning of this project. Psychologist, software programmers, artificial intelligence experts, robotics engineers and even you can contribute to this project. A soup of thoughts and ideas will give birth to a generation of robots that are able to think on their own one day. I applaud their efforts and open door policies to make this project move forward.

Inspired by Nikolai Tesla at 5:22 PM