More Human Than A Humanoid-Domestic Robot 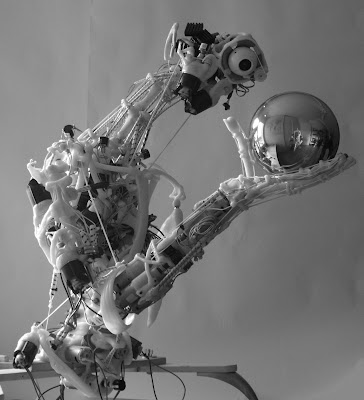 Many designs for domestic robots are guided by mechanical limitations and forms. That is why humanoid robots have a tough time to mimic human movements and that is something that is important to have if they will interact with us. The ECCEROBOT (Embodied Cognition in a Compliantly Engineered Robot) is a three-year project funded by the 7th framework programme of the European Union (ICT-Challenge 2, "Cognitive Systems, Interaction, Robotics") that is working on having robots be more like us than a machine. One spin off of ECCEROBOT is the robot named CRONOS (pictured here), created by the University of Essex to investigate robot consciousness through internal modeling. What makes this robot stand out is the materials used in order to have it closely model the human movement.

The skeleton for CRONOS was made from "polymorph" (a type of plastic that is easily shaped at 140 degrees Fahrenheit) giving its bone like color. The actuator system was made from screw driver DC motors, kite lines and shock cords in order to provide CRONOS with the unique human like movement. The ECCEROBOT project will definitely bring us closer to an NS-5 style of humanoid robot that will look and move like us. Watch the short video for a brief on this very interesting project.

Inspired by Nikolai Tesla at 2:00 PM