To begin, here is a picture of my friend KAWADA while cutting the ribbon on the first day of the 2009 exhibition; that is all he knows how to do, cut ribbons but he gets good money! 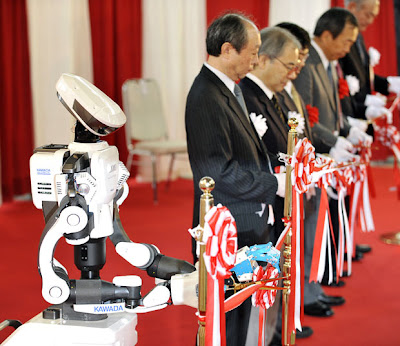 Here is cousin Motoman SDA5D, he still only plays with Lego toys every day. I have tried to convince him to get the Mindstorms NXT but he refuses to let go of his Lego bricks. He just never seems to grow up! 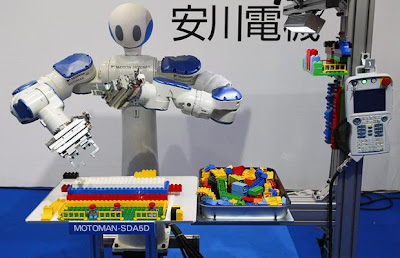 Now here is my brother Topio, he changed his name to go along with his new macho look because he said that I look like a "girly robot" so he pumped up just to play ping pong by himself. Doesn't he remind you of the Terminator? That is our uncle who somehow fooled everyone to believe he is the governor of the state of California, USA. 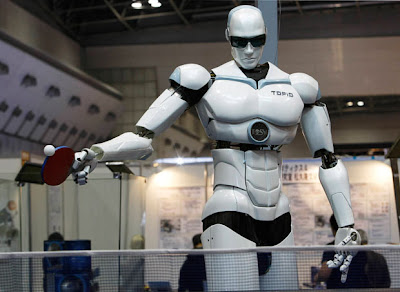 Here is little brother Robid with his "mentor" Tomotaka Takahashi who is asking me if he could adopt Robid! Is he crazy? Robid is just a young kid robot that has special smooth moves to win the hearts of the the human boys and girls one day. 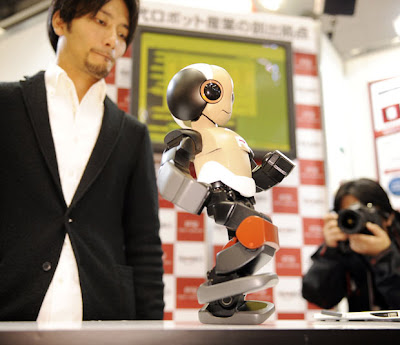 Here are my pet robo-dogs, I named them all Genibo so I won't forget their name. I taught them a few dance routines and to recognize me when I come home. I know they are not like the pure breed Aibo but they need a good home with humans that can take care of them. Wouldn't you get one? 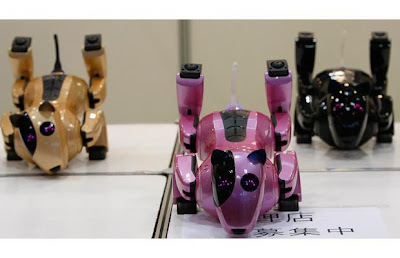 Here is a human from Shadow Robot Co. trying to make a better arm for me but I told them that I have no problems with my current one. What are they thinking here? Would they like me to replace their arm as well? I don't think so! Still, it is nice that they are still trying to improve on it. 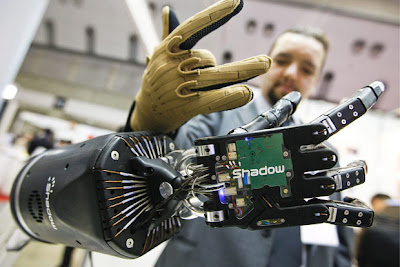 Finally, this is uncle Wakamaru trying to show off in front of all the media. He now is on a crusade to help elderly humans with their day to day tasks. At least he is doing it for a good cause. I do not know what the human behind him is trying to do, he looks strange. 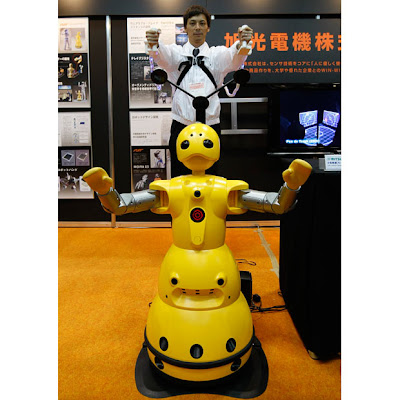 Well folks, that is about it for me but I will leave you with a video so you can enjoy more of friends and family that were allowed to attend the 2009 International Robot Exhibition. Word of warning, some of them are ugly but don't let that stop you from watching!

Inspired by Nikolai Tesla at 8:40 PM