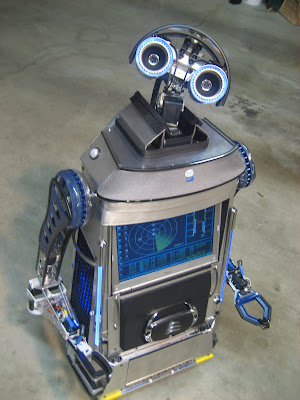 Every once in a while I find interesting domestic robots and projects that not many people know about. Take Dave Shinsel from Washington - USA, he has a small crew of robot projects that can make many of use drop our jaws to the floor! He currently works for Intel but his hobby is making domestic robots from almost off the shelf parts and software. Dave attempts to re-use parts, software and knowledge from one generation robot project so it can be used to build the next. The one I am personally most impressed with is Loki, he reminds me of WALL-E's bigger brother. Loki is a semi humanoid robot that uses WiFi for control and diagnostics, has visual processing, speech recognition, indoor path finding and a degree of artificial intelligence as you can check out in the video. Loki's body is mostly handmade with aluminum, his eyes are Logitech Notebook Pro Webcams, has a laptop computer as its "brains" (LCD screen is on chest), has 2 PIR motion detector sensors, 10 IR range detectors, 2 Ultrasonic rangers, 4 bumper sensors, electronic compass, motor speed and direction sensors for each wheel. This guy is up to the task to grow up as a great domestic robot! Doesn't he look a little bit like me? 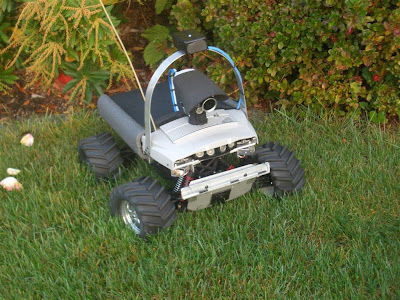 Dave also has other domestic robots that are very interesting like the Seeker. This guy was designed to compete in the 2005 "RoboMagellan ", this contest is like a "DARPA mini challenge" which he won 1st place! From this guy is were Loki got his method of path finding "intelligence". He was created out of a remote controlled toy car chassis and a laptop computer running Visual C++. NASA should be hooking up this guy to help create the next generation of economical rovers to roam around and study the planet Mars effectively. 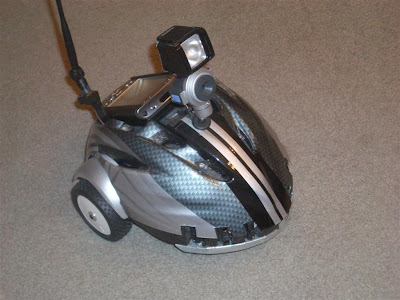 ...and iRobot should also learn a thing or two from Dave's "HelmetBot"! IRobot failed with their ConnectR project but Dave was able to create a remote presence robot with a bicycle helmet (of all things!) and an old iPaq "pocket PC" (do you remember it from the ancient days before the iPhone?). Simplistic, practical, effective and economical; why do companies think in a similar manner? But do you know what really makes Dave's robots the more special? It is not just the neatness, uniqueness or the interesting technologies used but that he shares all of the schematics, code and designs with all of us! Visit his web site (dshinsel.com) to learn more and to check out his other fabulous domestic robots! My hats off to Dave Shinsel and his contributions to the Domestic Robotics family. Enjoy!

Inspired by Nikolai Tesla at 7:42 PM

Welcome back to DomesRO and Thank you for great comments. Will continue posting and sharing new information on domestic robots.