This is true in my opinion. You probably are asking why or how? The iRobot Roomba did not evolve much since its introduction in 2002. Basically it has the same cleaning mechanism with just a few new bells and whistles ("Light House" technology, IR front bumper sensors, scheduling capability and modular design). Both a 2002 Roomba "classic" and a 2009 Roomba 500 series will clean your floors the same way by using a very similar cleaning algorithm. 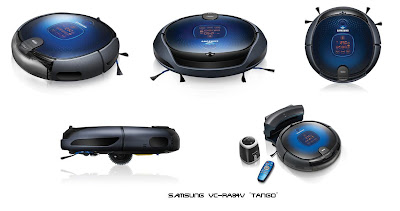 Sooner or later comes the "new" guy in town from Korea by the name of Samsung. They start off with basic floor cleaning robots that were less effective cleaning floors compared to a Roomba. Samsung engineers went to their labs and later introduced some vanguard improvements. They used ingenious methods to make floor cleaning robots efficient at their job. This was the time when the Hauzen VC-RE70V was introduced. The VC-RE70V robots "mapped" rooms and moved along in a calculated pattern to efficiently clean the floors in a single pass. This floor cleaning robot was able to "remember" where it left off so it can continue after it automatically recharges the batteries! But still room for improvement existed and again Samsung engineers went back to use what they have learned to create their most recent floor cleaning robot called the VC-RA84V "Tango" series.

The Tango series improved upon the VC-RE70V in the following ways: 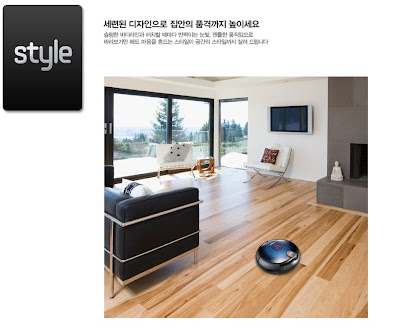 The Tango is a step closer to the ideal domestic floor cleaning robot, it just needs to add a self cleaning base (like the Karcher RC3000) and be available both in European and American markets!!! At the moment it can only be found in Korea at a price of US$400 ~ 500; not bad since an equivalent iRobot Roomba 500 series go about the same price. At the moment I can safely say that Samsung has surpassed iRobot in the domestic robotics technology department. At this pace, Samsung will leave iRobot behind in domestic robotics technology by a mile. iRobot are you still there? Take a look at this Italian market video from their "old" Hauzen VC-RE70V/72V series doing its job cleaning floors so you can get an idea of what all the fun is about. Enjoy!

Inspired by Nikolai Tesla at 8:02 PM

does this Tango robot clean rigorously also the pet hair? Is the dustbin big enough for cleaning a 60m2 at once?