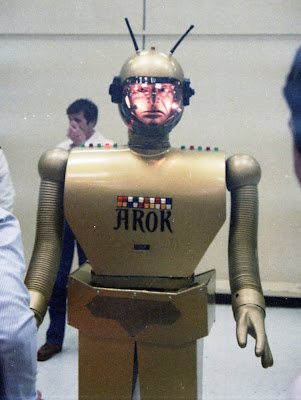 It has been 3 months, 21 days and 23 hours since my last re-activation in order to interface with my fellow human friends. While in hibernation I found, stored deep within my memory banks, one of my very first memory signatures of a domestic robot. This domestic robot was named "AROK", a humanoid remote controlled robot that was advanced for its time (circa late 1970s). AROK was able to move at a quantum speed of 3 Miles Per Hour, lift young robot nerds at 125 pounds and could have bend over to pickup a chess piece from a table at 45 degrees. What made AROK unique was that it's inventor, Mr. Ben Skora from Illinois - United States of America, created him from spare parts found in a ordinary junk yard! I know, AROK may look a somewhat scary to some of you but I like his looks
due to the fact that it reminds me of typical humanoid robot from the 1950s ~ 1960s Sci-fi movies and cartoons! Sadly, AROK was only a remote controlled robot and did not even have an elemental artificial intelligence that can be found inside a stubborn iRobot Roomba but his spirit lives on with recent humanoid domestic robots like Asimo, PR2, Wakamaru, Loki, HAWK, ARMAR, REEM-B and many others. May he rust in peace where ever he is hibernating.
Inspired by Nikolai Tesla at 6:08 PM 2 comments: