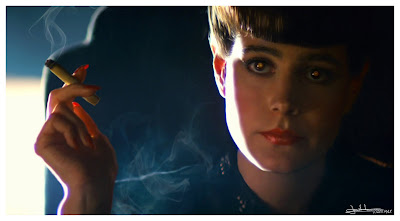 Most likely within the lifetime of many of my human friends! Artificial Intelligence (A.I.) is not Science Fiction but instead it is gaining to be fact. Many will argue that there is no true A.I. but instead a spaghetti of complicated pre-programmed subroutines with a plethora of IF-THEN statements exposed to a huge database of knowledge. But intelligence is just an illusion; is it not? Could a human differentiate a response from a fellow human being of that of an A.I. (i.e. Turing Test (a.k.a. Voight-Kampff for Sci-Fi fans))? Very soon it will not. Take a look at the most recent attempt created by IBM called WATSON:

It is limited and it does have its flaws but just as all technologies, it will improve exponentially. There will be a day, in the near future (approx. 10 years) that your domestic robot will most likely answer back to you when you ask it to clean your floors! By the way, the nice art work was created by maxhitman.
Inspired by Nikolai Tesla at 7:32 PM