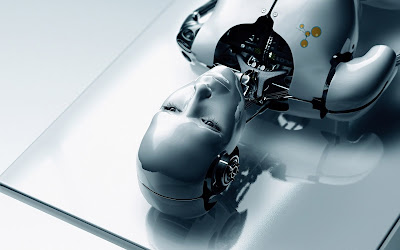 At the current pace of domestic robot technology, within a human generation or two, your domestic robot will be indistinguishable from your fellow human being. Sooner or later genetics and robotics will interleave each other to create a new cyber-genetic life form and a future Steve Jobs-like entrepreneur (like Peter Weyland from "Alien" Sci-fi universe) will announce such a technology. Your typical domestic robot will be not much different than you. Sci-fi in the likes of the New Battlestar Galactica, A.I., Blade Runner, Alien, Star Trek and Bicentennial Man (to name a few) have predicted that humans will reach a level of technology to create such God-like wonders. The issue to ponder to such wonders is how will human species react to their equal? enslave them? destroy them? or work together for the betterment of both against the face of the universe? Many would say that if these robots were able to acquire self awareness that they in turn enslave and/or destroy their creators.


These are hard and disturbing questions to make, questions that require to be asked and answered accordingly. Currently it appears that your trustworthy domestic robot floor cleaner, lawn mower, sentry and pet will not be a cause of concern but in the time line of your immediate decedents it will be very different. Here is a nice computer generated short (created with a Sony PS3 as a tech demo from QuanticDream) about a Domestic Android called "Kara" caught in a very tough situation when her human creator finds out that she is self aware. Will you react the same? Welcome to the future.

Inspired by Nikolai Tesla at 6:17 PM No comments: